Designing the landscape of a successful venture 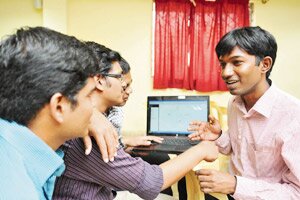 Sanjay had been feeling guilty that his parents had to shell out a hefty fee to get him admitted into an engineering college. The ensuing years in college were spent juggling classes and the demands of his fledgling business, even as his parents urged him to focus on getting good grades. Now, he is certain that his future lies with the business.

“Make no mistake, AJS (Services) will be big,” the lean 21-year-old says, offering a sudden glimpse of steely resolve in the middle of nuanced patter streaked with wry humour.

He got a leg-up in his business through his father, who worked in housekeeping at the Taj group of hotels before becoming the manager of the Chennai facility of a large logistics company.

The idea came to him after he graduated from high school, when his father took him to meet a wealthy and influential workplace acquaintance, Sanjay says. It was in connection with getting admission to an engineering college, he recalls, adding with a grin, “I’m an average student.”

During the visit, he was curious about men working in the garden of a private residence, and was told that they were workers who had been contracted to landscape the corporate office and were working in the senior executive’s house for no extra pay.

Two thoughts passed through his mind: It wasn’t right that the contract workers were doing the work free; and that people would probably pay for well-managed services connected to their living and working environments.

To read the rest of the article, visit LiveMint.com's Student Enterprises section.