The unique entrepreneurship campaign that was E Week India 2012 came to a culmination at the grand awards ceremony at Bangalore on February 18, 2012. Dayanand Sagar Memorial College of Engineering played the host, and it was heartening to see the huge auditorium packed to the brim, with not a standing room to spare. The rapturous cheers and cries made it seems as though the whole world had joined in the celebration of entrepreneurship! 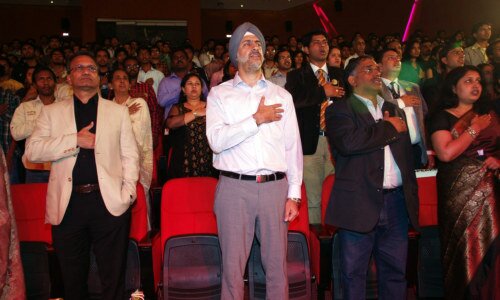 The three-hour long ceremony had all ups and no downs at all, with inspiring speeches, dances from the group Vibes, and, of course, wild cheers from the E Week winners. For those who were unable to attend the awards ceremony, a live webcast of the whole programme had been arranged, and hundreds of entrepreneurship enthusiasts tuned in to watch and be a part of the excitement.

Serial entrepreneur and CEO of Jivity, Mukund Mohan’s speech was inspiring and full of humorous quips, especially when he mimicked the swish of the ginshu knife with ‘kshuk, kshuk, kshuk’. His comment, "Entrepreneurs are neither optimists, nor realists, nor pessimists. They are opportunists," was met by a thunderous applause from the approving crowd.

Kanwaljit Singh, Co-founder and Sr. Managing Director of Helion Advisors, extolled the problem-solving qualities of an entrepreneur, especially problems that no one else wants to solve. He addressed the audience as future entrepreneurs, and told them not to worry over what the solutions are for and what the end goals are, and to do it for their own selves.

It was award time finally and no one in the audience for the next hour would remember their seats or whom they hugged in happiness. The thunderous applause from the audience was no competition for the winners’ delirious cheers and celebratory dances.

As the ceremony wound down, we couldn’t help but marvel at the ideas and initiatives that had their birth in vision of inventing the future. That these ideas were in the hands of the energetic fired young people like those in the audience of the awards ceremony was both heartening and reassuring.