In India, age does not define entrepreneurship, as certain young college students have shown, writes Shayan Ghosh in Deccan Herald.

They are the businessmen of the Gen Y, who believe that successful business ventures could readily bloom if one has the idea that counts. 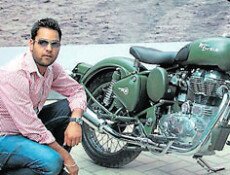 When 24-year-old Saurabh Katar, a student pursuing post-graduation in Bangalore, recalls days when he first began his venture in Delhi to modify and sell exhaust systems for Royal Enfield motorcycles, he says he had no idea that his products would someday be exported abroad and fetch him two patents.

This is the story of Sans Inc., the only company in India that produces modified exhausts for Enfield. Katar’s products are exported to Canada, Malaysia, the Middle East and also to Australia. His factory in Delhi churns out his dream products for the 350cc and 500cc beasts.

“The thump is amazing and so is the fuel efficiency, when Sans Inc’s exhausts are fitted,” says Katar. With products ranging between the reasonable range of Rs 1,200 to Rs 1,900, Katar sees a great future ahead. For him, the most important thing to take his business forward is to keep prices within the convenience of customers. Saurabh is one of the 30 student entrepreneurs recognised by a joint effort of Tata First Dot along with National Entrepreneurship Network (NEN).

This effort is India’s first mentoring and recognition platform for student startups, a unique initiative that promotes, mentors and showcases India’s most dynamic and youngest entrepreneurs. The programme consists of multiple strands and is a combination of workshops, competition and showcase, mentoring and ongoing support from the community. This year, 30 shortlisted ventures including the 10 winning entries will be provided professional mentorship via NEN for one year and an opportunity to network with entrepreneurs, angel investors, mentors and experts.

Another unique venture that came out in this initiative was a student-owned cafeteria called IBMR Chatter Box. The uniqueness lies in their revenue model which they had developed when it came into being in 2009. The students of IBMR College were promised dividend in return of their investment. They had then, managed to gather Rs 56,000 and as every year they pay investing students a dividend of 12 per cent on amount invested.

To read the rest of the article, click here.