There are enough things to remind me that I have grown old. And that it has been a decade since I left campus. Facebook, w 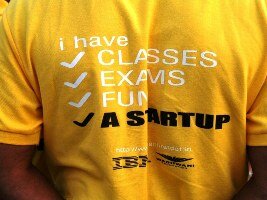 Way back in 2000, entrepreneurship didn’t make it to any of the cool conversations we had at the University. I didn’t know of a single student launching a startup. Carrying forward daddy’s business was sometimes discussed, but ambitions of being a first-generation entrepreneur? No, not in the batch of 2000.

So you know why NEN First Dot that I attended at SSN College of Engineering in Chennai on Jan 10 and 11 was such a revelation to me. The showcase event received nominations from 141 student startups (!!!). It was the largest and most comprehensive list of student-run companies in India so far, and represented a diverse range of sectors, from IT to retail to cleantech. Startups that eventually made to the shortlist of Top 30 student startups, which were invited to the event at Chennai, included an egg specialty restaurant (sunny side up, if you look at their balance sheet!), a shoe-design firm, and a staffing company for kabadiwalas!

The event was marketed extensively across the country, and received nominations from places as far as Patiala, Asansol and Vijayawada. 70% of the nominations came from NEN member institutes. Digging further, we discovered (not much to our surprise really) that over 40 percent of the entrepreneurs were Entrepreneurship Leaders on their campuses, building and organizing entrepreneurship-related events and programs.

The Chennai E Cells gang – a huge gang really, comprising 60 students from across 16 E Cells in Chennai – did an excellent job organizing and running the event. The Trust team (including, yours truly) had an exciting time supporting the Chennai E Cells, so much so that we now have some exciting plans in the offing! But then, that’s for another post!

Also, check out this video on NEN First Dot that aired on ET Now: http://www.youtube.com/watch?v=CaupTpVhG1A