Shrinking windmills to fit on rooftops 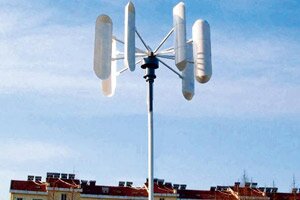 Windmills may no longer be restricted to large open fields with unrestricted airflow. Bhupesh Sharma’s venture is shrinking the bulky motors and bringing windmills to the rooftops and open spaces of residential and office buildings, to provide electricity directly to users.

Sharma’s two-year-old startup, Breson, designs and manufactures customized small wind turbines and pumps. “Wind direction is not a constraint as these turbines can use it from any direction,” said Sharma, a 22-year-old electrical and telecom engineer from Mumbai University. He is now studying business design from Welingkar Institute of Management Development and Research in Bangalore.

Sharma founded Breson along with Uday Nair, a chartered accountant, and Vikal Chaurasia, an engineer. It was one of the top five judges’ choices at this year’s Tata First Dot student start-up awards.

The start-up’s business model of creating power generation products that can tap naturally available wind makes it an important initiative particularly in the context of an energy-starved nation like India.

Using clean technology such as windmills for powering residences, schools, hotels, temples and farms can go a long way in beefing up the nation’s effort to provide energy as well as in combating climate change.

Sharma said the turbines his firm makes can be a long-term, cost-effective solution for generating renewable energy in the cities at economical rates. The turbines can also be used for rural electrification as well as for improving irrigation systems, he said.

To read the rest of the article, visit LiveMint.com's Student Enterprises section.