Amidst Eweek planning & craze, I would like to share my experience and feedback from few of the participants who attended ‘Idea generation and Opportunity Evaluation’ workshop. This was at IIT-Bombay on January 28th (last weekend) during E-Summit 2012.

The IIT-B e-cell team mentioned that this was the only workshop which received more than 160 entries despite having had no promotions other than a link on the e-cell website. But only 40 participants could be accommodated because of the format of the workshop. The room was packed (extra chairs had to be arranged at the last minute) and the e-cell organizing team had a tough time dealing with the disappointed 120 others. It didn’t seem too different from a MTV Roadies audition!
Uday Wankawala, NEN Consultant

It was wonderful to witness Rajendra Bhat, NEN’s Chief Mentor energise the introductory session with apt examples of current problem areas like traffic, pollution, population, waste etc and the necessity for entrepreneurs to think in particular direction to chance on a winning idea, to get the participants thinking.

The next session was the most enthralling - Raj’s new version ‘Opportunity Identification’ where he explained the need for assessment of ‘Critical-Discontentment’ axis by entrepreneurs. This really helped the group to work well for the next assignment which was to identify exciting venture/ideas and the resulting ideas like stationery or paper items, ready-to-eat food products, premium mobile service providers were amazing. The session concluded with evaluation of one best idea through seven domains framework. 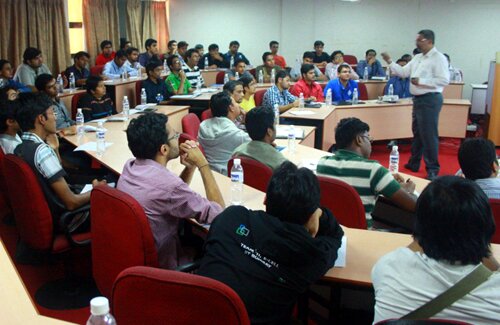 There was much appreciation for the chief mentor who conducted the workshop. Himanshu Khemani, Event Manager (E-cell, IIT-B) praising the chief mentor said, “Thank you very much for joining us at E-Summit and giving us your precious time. It was great having you at the summit and I am not saying this only on the basis of my past experience of your workshops but on the basis of the feedback obtained by the participants and my coordinators.”